I have always been interested in both sexes of humans. My appeal to both sexes I think stems from spending most of my life hanging out with both of my parents regularly. I learned to appreciate both sexes and what each of my parent’s male and female personalities had to offer me. Throughout school, I became somewhat of a tomboy and participated in outdoor activities, and sports were certainly included in that. I was pretty skilled at sports for my gender and played basketball on the boys’ team. I naturally had an affinity for boys and spent a lot of time with them, but after about 4th grade, I stopped playing basketball and started riding horses. I met a lot of great girls during this time and had a lot of bonding moments on little horseback adventures with some of my girlfriends in middle school and high school. In high school, I began having a lot more sleepovers with girls, not the boys since my parents disapproved. But, on these sleepovers, some of my girlfriends and I fooled around a little bit. When I was 15, I had my first sexual experience with a girl, and at that point, I never knew of such a feeling. 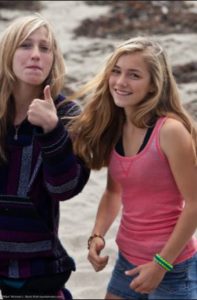 As a Junior in High School, I thought I was just a lesbian, and thought the attraction to men was not my thing. That is, until I met Brett. Brett worked for his dad’s company as a concrete driveway contractor. He was very muscular and toned from working weekends and the summer time for his dad, and was bigger and stronger than most boys in my class. Knowing that I was a lesbian, he still had the courage to ask me to prom, and although I had some level of attraction for him, I never really felt as if there would be a romantic connection between us since I felt my love was for females. Boy, was I wrong. Prom night, I had the same butterfly experiences that I had when I first had sexual contact with girls, but I had these feelings just talking to Brett, without either of us even making advances throughout the night.

We had a great time at Prom, but we were both nervous and didn’t make any serious advances, but remained close friends throughout the year. I didn’t have any sexual experiences with anyone until my Senior Ball dance, where Brett asked me to dance again. I was surprised, but I shouldn’t have been since we had grown to be such close friends.

The whole Senior Ball night, we danced with butterflies in each of our stomachs. I could feel it in him. That night, I had my first sexual experience with a boy, and it was revolutionary. I began to question my feelings. I no longer felt attracted to girls, and I was in love with these boy. That year, going into UC Irvine together, we became an item. We would have crazy romantic experiences with each other, and our love was so strong, that is, until we both met Emma. Emma was in our intro to Environmental studies class. She had long blonde hair, and is what most people would describe as a Barbie Doll girl. All the boys were after her, and after both of us becoming friends with her, we got to know her personality and knew why everyone was chasing her.

I started to develop feelings for Emma, and told Brett this. To my astonishment, he told me the same thing. Together, we formulated a game plan to have Emma spend the night, have a couple of drinks, and just see where things went.

So about a week after this, Emma came over for drinks, and immediately there was some tension in the air. After our inhibitions were lowered, the conversation took a promiscuous turn, and Emma started to get very handsy with me. Normally, I would not have thought anything of it, because sometimes that’s just what us drink girls do. But this time was different. Emma was stroking my arm in a gently way, actually massaging me and it felt as if she was trying to give me goosebumps. In my experience, when girls are doing this, it’s usually the starting point of foreplay. I looked at Brett off and on, and I could tell he was thinking the same thing, so I thought to myself, I’m gonna make a move.

The conversation never ceased during this whole time, and while Emma was getting a little handsy with me, I started caressing her hair. The way her eyes rolled when I touched her ear, I could tell she had sparks in her eyes for me. So I just said F it, let’s cut to the chase. My hand slipped, and I touched the outside of her pants in her crotch area, and cupped my hand. She gave me this look of confused delight, and went straight for my lips. We started to get really handsy with each other and feeling one another up. She was on top of me, her breasts in my face, but her head lay in my Brett’s lap. At that moment, I could tell she was attracted to both of us, and I climaxed to the thought of this feeling immediately.

Brett, Emma, and I proceeded and escalated our physicality with each other until we were all taking part in the most thrilling sexual experiences of out lives. I know that day, that there were strong feelings between us three, and so began my first, and so far only three-way relationship.